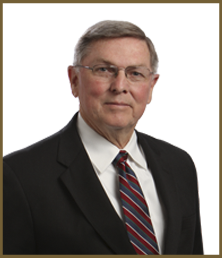 Ted Lee specializes in intellectual property litigation and is Board Certified in Civil Trial Law by the Texas Board of Legal Specialization. Mr. Lee has been described in the San Antonio Business Journal as “ferociously protective of his clients” and a “good, fiery litigator”. Mr. Lee started work as a patent agent for the National Aeronautics & Space Administration in 1967, working on the Saturn Apollo program. Some of the early patent applications prosecuted by Mr. Lee were used in putting man on the moon.

Mr. Lee then served as a JAG officer in the United States Marine Corp (1970–73) trying hundreds of special and general court marshal cases. When Mr. Lee entered private practice in San Antonio, Texas, his extensive litigation experience was used in trying all types of intellectual property cases ranging from the alleged theft of a secret formula for picante sauce to patent infringement of complicated electronic control systems. Throughout Mr. Lee’s 35+ years, he has prosecuted and obtained many patents, primarily in the electrical and electro-mechanical areas. In addition, Mr. Lee has represented clients in negotiations to license their technology. However, if negotiations are unsuccessful, Mr. Lee will pursue the infringers through litigation on behalf of his clients.

Mr. Lee also represents individuals and corporations that have been accused of alleged violations of patents, trademarks, copyrights, trade secrets, contracts or unfair competition. Mr. Lee believes in the adage “the best defense is a good offense.”

Board Certified, Civil Trial Law Texas Board of Legal Specialization State Bar of Texas (since 1981)

Let Ted Lee know you found them on our online directory!